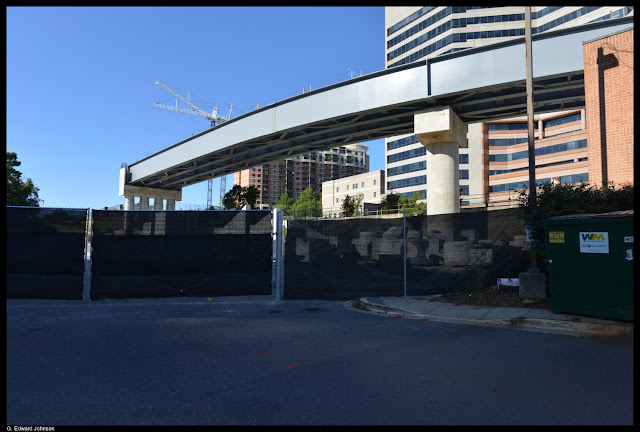 It looks like construction of the purple line is pausing due to the state and Purple Line Transit Partners feuding over cost overruns and delays.  Because of that, it is likely that views such as these will be a part of our lives for quite some time.

Posted by Edward at 9:31 PM No comments: 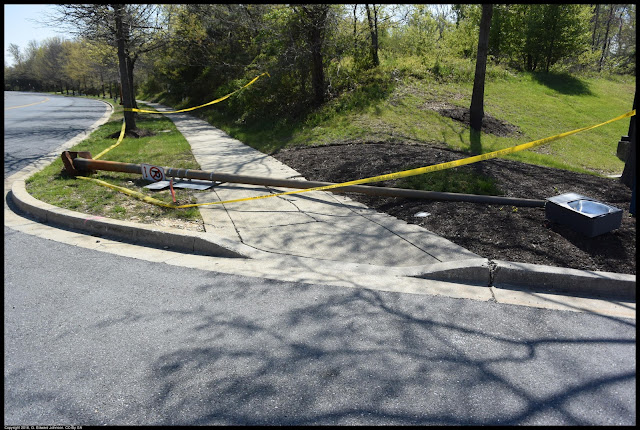 Several times now I have gone down Plum Orchard Drive (behind the shopping center with the Target, Babies R Us, and Shop-Rite in Calverton, MD) and seen a fallen street light.  At first I assumed that someone had run into them, but I got a close look at a recently fallen one. 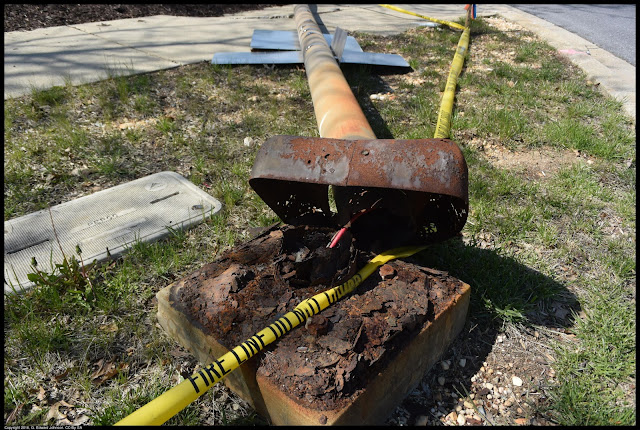 You can see the base of the pole just rusted through and the whole thing fell over.  Along the street you can see that some have been replaced, but some are very old and rusty, I expect more will fall in the future. 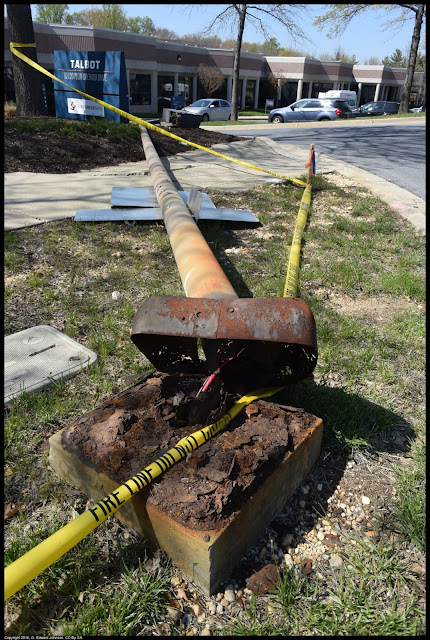 Flood damage on Colesville road at the Northwest Branch

On Wednesday there was some very heavy rain and the Northwest Branch flooded Colesville road, closing it for almost two days. When the floodwaters subsided there were debris and silt piled up and part of the sidewalk was washed away. These pictures were taken on Friday at lunch, approximately 24 hours after the road re-opened. 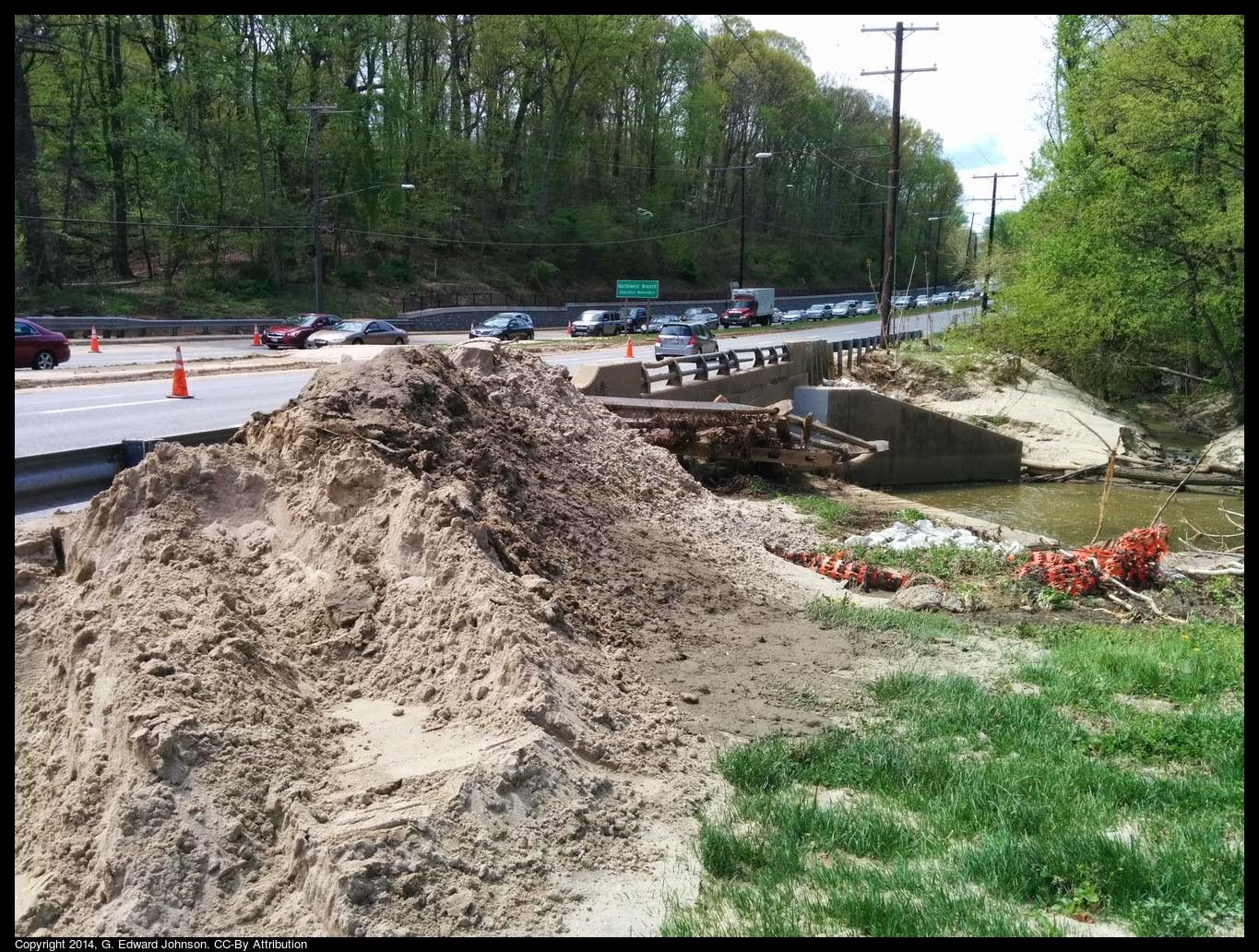 A big pile of sand has been cleared from the road and piled up.  Behind that you can see a fence that has washed up against the road. The leftmost lane of southbound MD-29 was still closed. 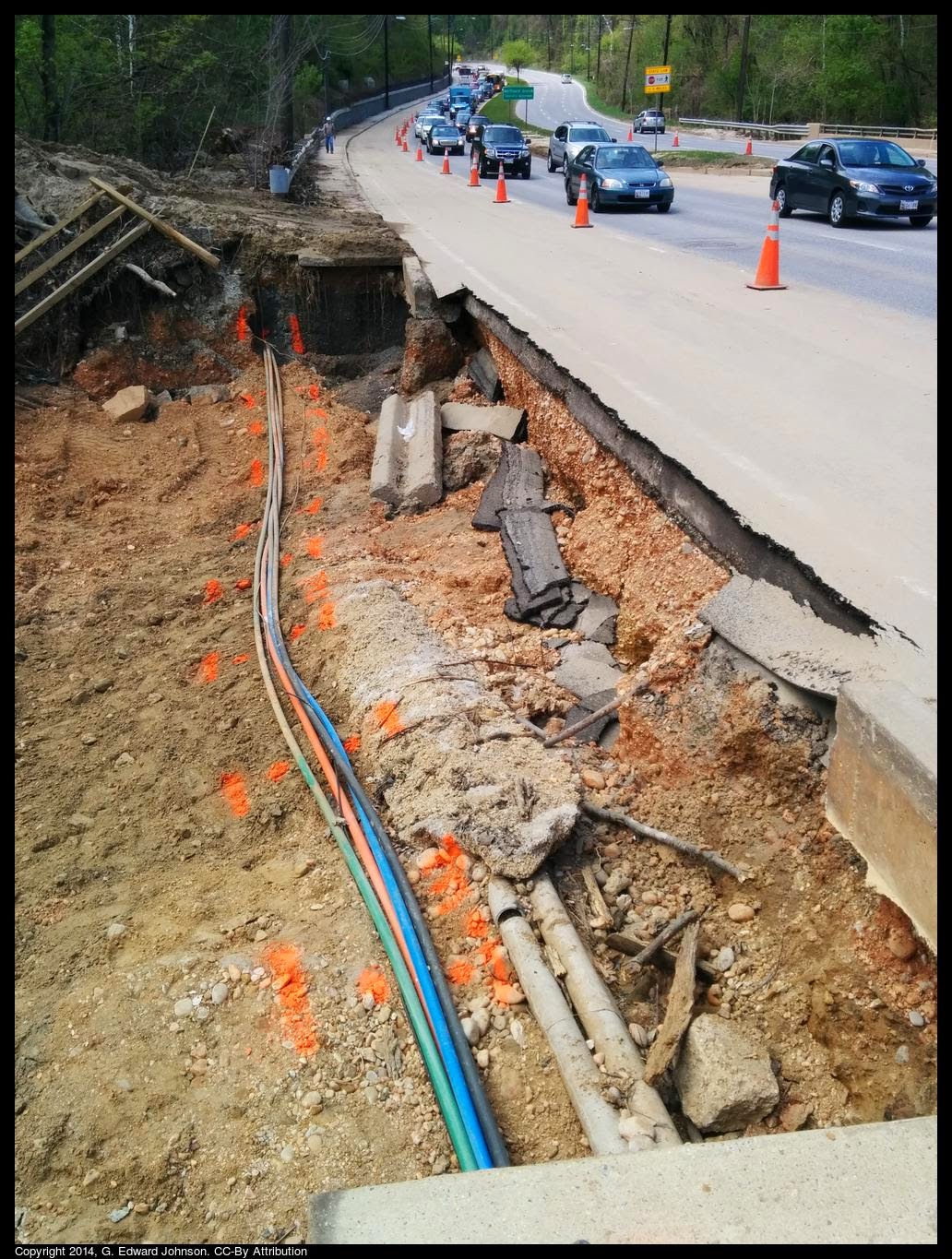 Part of the sidewalk washed away exposing a number of formerly buried cables.  They have already started marking the cables for repair. They have been quick to start fixing things, you can't see it in this picture, but they have already smoothed out the washed away section.  The rightmost lane of MD-29 North was still closed, causing a significant traffic back up even in the middle of the day. 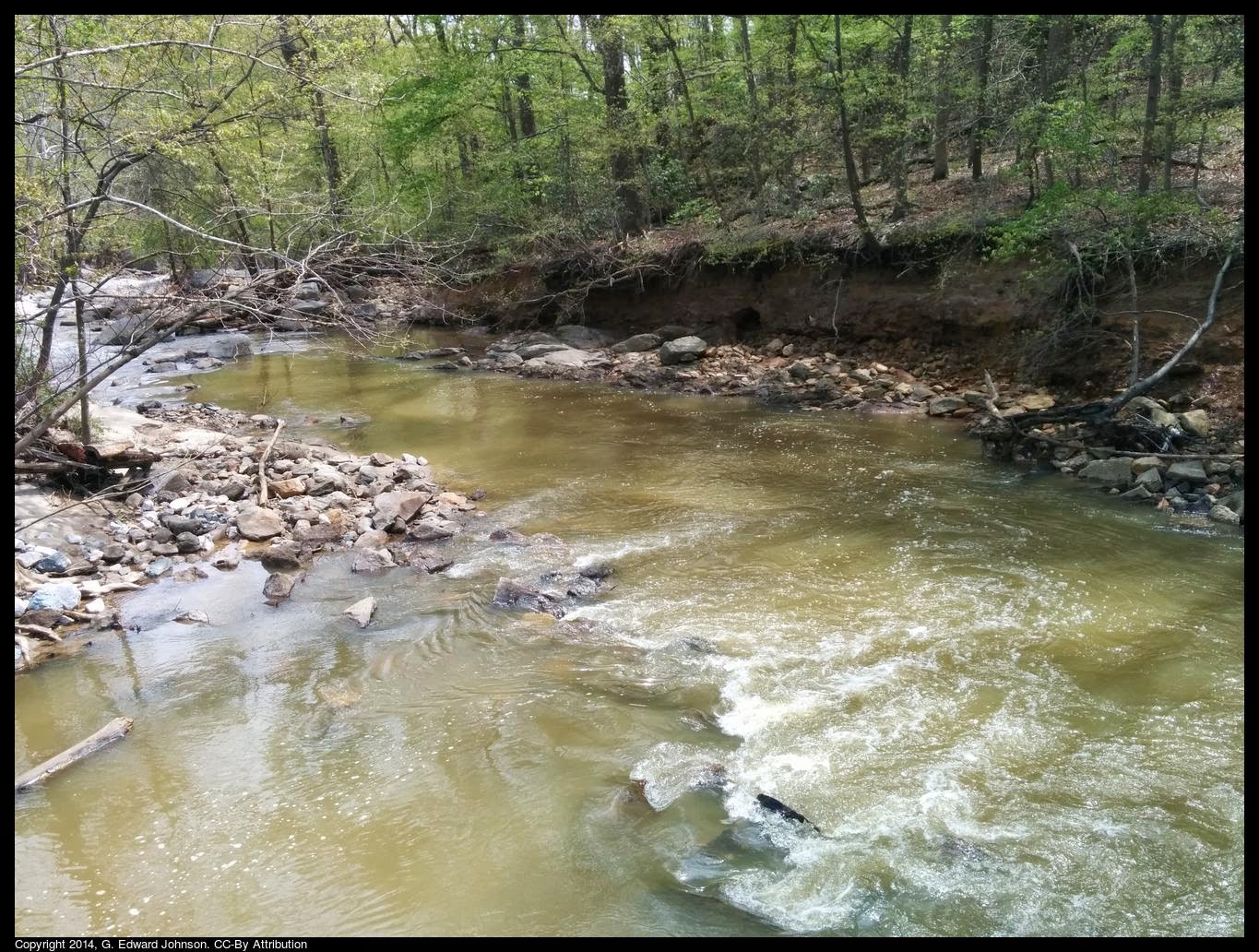 The northwest branch from the bridge looking downstream.  The water level isn't back to normal but it is much lower than during the flood. 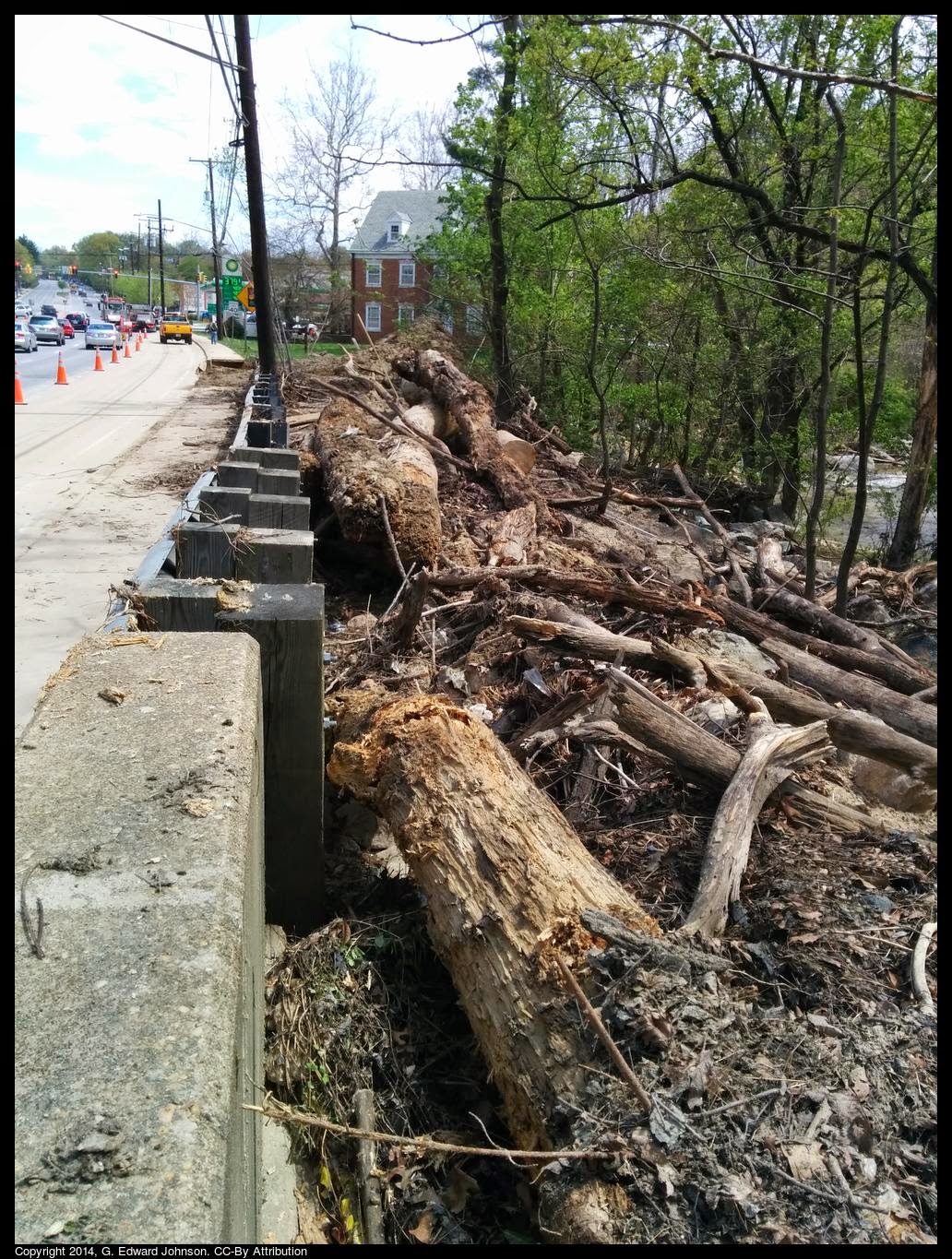 You can see a pile of dead wood just on the other side of the guardrail.  I suspect it was cleared off the road and dumped there 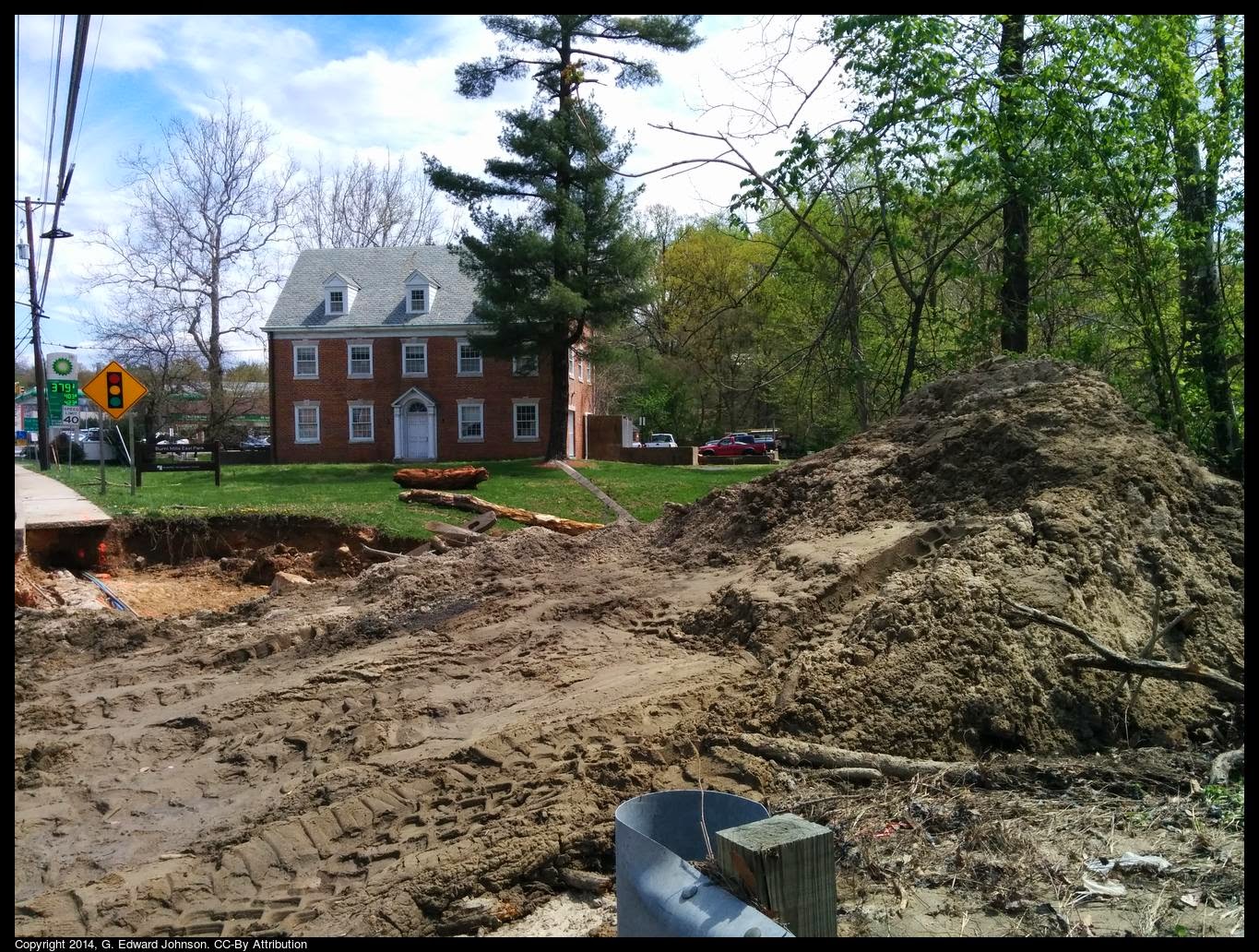 A large pile of sand that was cleared from the road.  You can see the washed out sidewalk just beyond it.
Posted by Edward at 8:28 AM No comments: 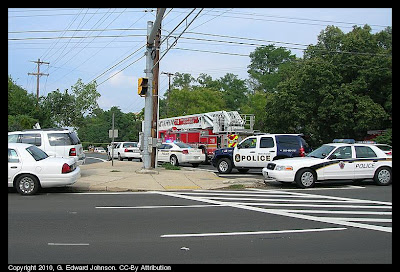 Storms, power outages, dark intersections, power lines down across the metro rail tracks, it certainly has been an eventful week here in Silver Spring, MD.

Just when you thought it was safe to move through Silver Spring.... No, it isn't shark week (that's next week, but Chompie has been keeping an eye on things). Today's thunderstorm brought a few more power outages and sent another batch of traffic signals dark. The police had a handle on things here at Colesville Road and East-West Highway this evening. More troubling was how some power lines along Spring Street fell across the metro tracks and a train drove partway over them. No one was hurt but 41 people were stuck on the train. Above them, along Spring St, the police had closed the road, the fire trucks were there, and Pepco was trying to fix things. 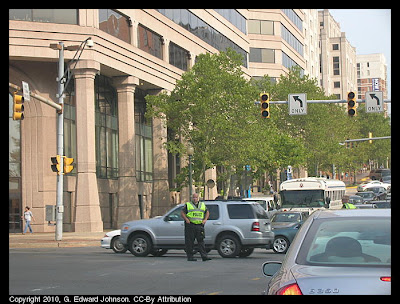 Posted by Edward at 7:05 PM No comments: 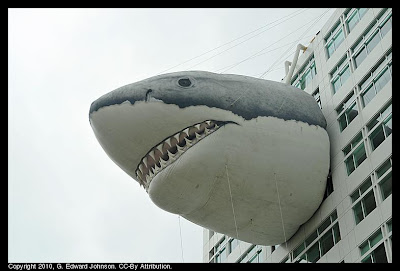 The first week in August is Shark Week on the Discovery Channel. To advertise this they have put a huge inflatable shark sticking through their headquarters in Silver Spring, MD. There are Four parts to it, the head on one end of the building, fins on two of the sides, and a huge tail on the other end of the building. You can see it from all around and it really makes an impression. You can see the head is three stories tall. It is held in place by ropes hanging down from the top of the building and ropes going to heavy jersey barriers sitting on the ground. 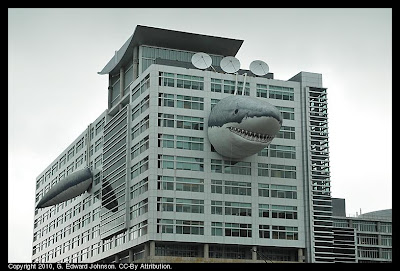 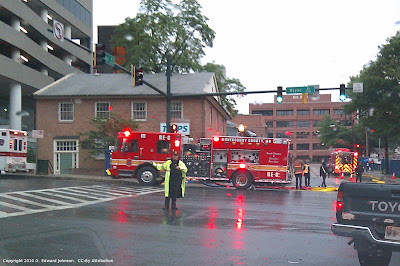 Today around 5:30pm there was a very smoky fire at the transit center construction site next to Silver Spring Metro Station. The fire department was quickly on the scene and put it out. A couple of ambulances showed up, one left with its lights and sirens on, I saw them loading an empty stretcher back onto the other one so it looks to me like there was a single injury.
Posted by Edward at 10:29 PM No comments:

Have a blast in Silver Spring

Proof that the Silver Spring Transit Center is progressing: Beginning Monday, February 22 (weather permitting) and continuing for 4 to 6 weeks there will be blasting. This blasting will generally start around 11am and continue through nap time (2pm).

Those in the immediate vicinity of the site may hear a 30-second air horn five minutes before a blast occurs, and then three short horn tones five seconds before the blast explosion. Within about a minute of the blast, a 15-second all clear horn will blow once the Master Blaster verifies the completeness of the blast.

What a great job title "Master Blaster". You can read the full press release.
Posted by Edward at 9:13 PM No comments:

Mission: Earth - An Exhibition at NOAA

On February 6th through the 13th between 11 am and 4 pm (except Sunday Feb 7) the National Oceanic and Atmospheric Administration is hosting an exhibition about Earth observation science and technology. See some of the tools NOAA uses to study land, sea, and sky as well as hands-on exhibits, guest speakers, and video presentations.

Located in the NOAA Science Center at 1301 East-West Highway, Silver Spring, MD, admission is free. Public parking is available, near the Silver Spring Metro Station, photo ID required for adults. Visit their website for more information and a schedule of events.
Posted by Edward at 2:50 PM 2 comments: 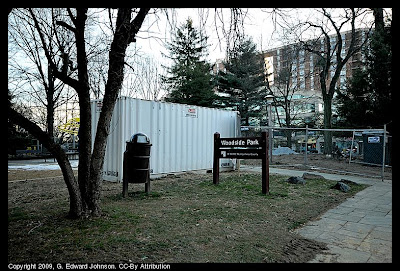 Woodside Park's much needed renovation/overhaul/remodeling is in full swing. What was once a bunch of broken down playground equipment is on its way to being a shiny new play place. 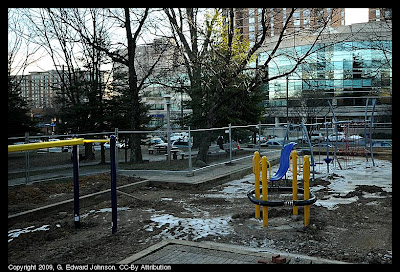 This part of the playground has partially installed equipment and no surface yet. 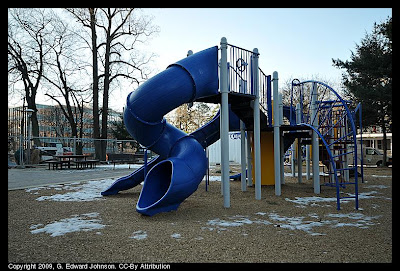 One of the play areas is complete and open for use. Bundle up and see how a slide feels when it is below freezing.

It looks like they have only been working on the playground areas so far, not the rest of the park. They are planning on putting a small skateboard area in but haven't started that.

Woodside park is bounded by Georgia Ave, Spring St, and 1st Ave in Silver Spring, MD
Posted by Edward at 8:23 PM No comments: 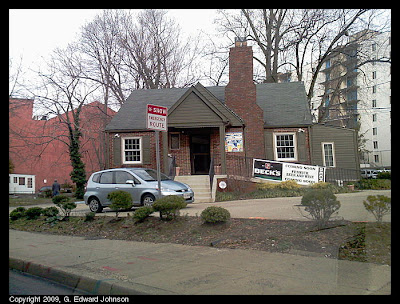 I just noticed that the little brick building (that looks like a house) on the corner of Fenwick Ln and 1st Ave in Silver Spring, MD is soon to be a new beer and wine store. There is a big banner on the wheelchair ramp that says "Coming Soon, Fenwick Beer and Wine, Coming Soon"